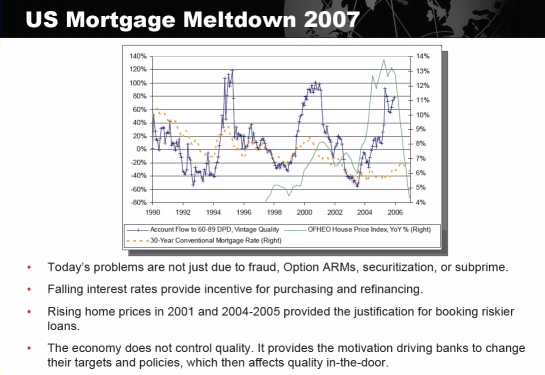 During a panel at Fair Isaac’s Interact conference last week, a banker from Abbey National in the UK suggested that part of the credit crunch was due to the use of the FICO score.  Unlike other panelists, who were former Fair Isaac employees, this gentleman was formerly of Experian!  So there was perhaps some friendly rivalry, but his point was a good one.  He cited an earlier presentation by the founder of Strategic Analytics that touched on the divergence between FICO scores and the probability of default.  The panelist’s key point was that some part of the mortgage crisis could be blamed on credit scores, a point that was first raised in the media last fall.

The FICO score is not a probability.

Fair Isaac people describe the FICO score as a ranking of creditworthiness.  And banks rely on the FICO score for pricing and qualification for mortgages.  The ratio of the loan to value is also critical, but for any two applicants seeking a loan with the same LTV, the one with the better FICO score is more likely to qualify and receive the better price.

Ideally, a bank’s pricing and qualification criteria would accurately reflect the likelihood of default.  The mortgage crisis demonstrates that their assessment, expressed with the FICO score, was wrong.  Their probabilities were off. END_OF_DOCUMENT_TOKEN_TO_BE_REPLACED