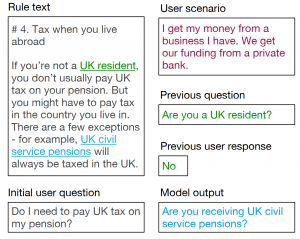 END_OF_DOCUMENT_TOKEN_TO_BE_REPLACED

Deep natural language understanding (NLU) is different than deep learning, as is deep reasoning.  Deep learning facilities deep NLP and will facilitate deeper reasoning, but it’s deep NLP for knowledge acquisition and question answering that seems most critical for general AI.  If that’s the case, we might call such general AI, “natural intelligence”.

Deep learning on its own delivers only the most shallow reasoning and embarrasses itself due to its lack of “common sense” (or any knowledge at all, for that matter!).  DARPA, the Allen Institute, and deep learning experts have come to their senses about the limits of deep learning with regard to general AI.

General artificial intelligence requires all of it: deep natural language understanding[1], deep learning, and deep reasoning.  The deep aspects are critical but no more so than knowledge (including “common sense”).[2] END_OF_DOCUMENT_TOKEN_TO_BE_REPLACED

The following is motivated by Section 6359 of the California Sales and Use Tax.  It demonstrates how knowledge can be acquired from dictionary definitions:

Here, we’ve taken a definition from WordNet and prefixed it with the word followed by a colon and parsed it using the Linguist.

END_OF_DOCUMENT_TOKEN_TO_BE_REPLACED

As you can see, there are a number of compound words and acronyms, as well as references to the Code of Federal Regulations that need to be defined or recognized to understand this sentence.  END_OF_DOCUMENT_TOKEN_TO_BE_REPLACED

Benjamin Grosof and I will be presenting the following review of recent work at Vulcan towards Digital Aristotle as part of Project Halo at SemTechBiz in San Francisco the first week of June.

The resulting logic is generated as Rulelog, a draft standard under W3C Rule Interchange Format’s Framework for Logical Dialects, and relies on SILK’s support for FOL-like formulas, polynomial-time inference, and exceptions to answer questions such as those found in advanced placement exams.

We present a case study in understanding cell biology based on a first-year college level textbook.

Capturing some policies from a publication by the Health and Human Services department recently turned up the following….
It’s probably the case that there are more specific lists than just “some list” or “any list”, as suggested below.
This is a good thing about applying deep natural language understanding to policy statements.  It helps you say precisely what you mean, even if you are not using a rule or logic engine, but just trying to articulate your policies or requirements clearly and precisely.

Work on acquiring knowledge about science has estimated the cost of encoding knowledge in question answering or problem solving systems at $10,000 per page of relevant textbooks. Regrettably, such estimates are also consistent with the commercial experience of many business rules adopters. The cost of capturing and automating hundreds or thousands of business rules is typically several hundred dollars per rule. The labor costs alone for a implementing several hundred rules too often exceed $100,000.

The fact that most rule adopters face costs exceeding $200 per rule is even more discouraging when this cost does not include the cost of eliciting or harvesting functional requirements or policies but is just the cost of translating such content into the more technical expressions understood by business rules management systems (BRMS) or business rule engines (BRE).

I recommend against adopting any business rule approach that cannot limit the cost of automating elicited or harvested content to less than $100 per rule given a few hundred rules. In fact, Automata provides fixed price services consistent with the following graph using an approach similar to the one I developed at Haley Systems. 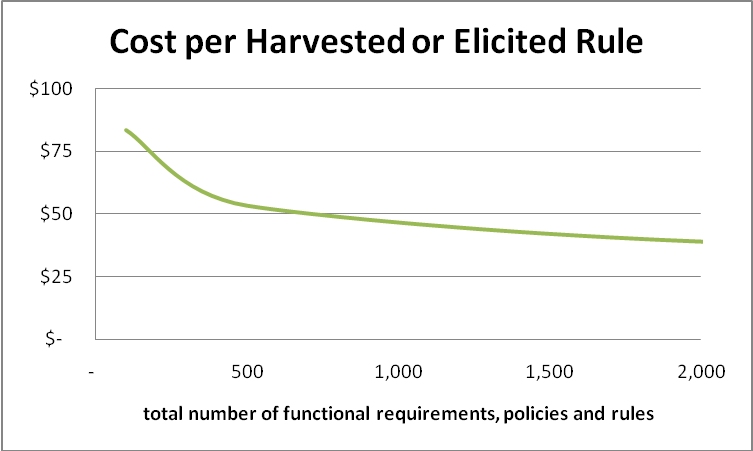