There were some conflicted parties in the room and a heated debate ensued.  I got up to a whiteboard and argued that it was straightforward to extract logic via natural language processing. (I took a few arrows at this point.)

In particular, I wrote down the following sentence and said it was easy to reduce it to axiomatic logic:

To fully represent the meaning of this sentence requires an ontology to back up the words, but there was not much debate on that.  There was not much concern about understanding how full and half page ads differ, for example, or that a magazine has front and back covers.

The debate was on whether any system could understand the sentence well enough to produce an axiom with the semantics “if an ad runs on the back page of the New York Times Magazine it must be a full page ad”.

The only really interesting aspect of this sentence (as far as I was concerned) is the use of “only” as, in effect, a quantifier. 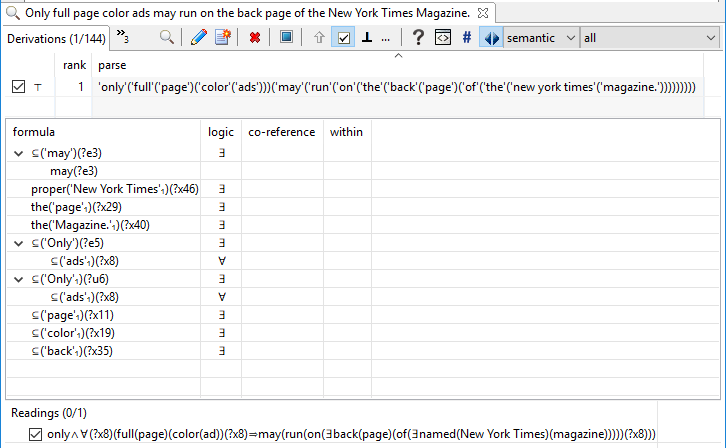 This is no big deal, logically speaking (at least if you don’t limit your thinking to classical first-order logic and allow yourself some generalized quantifiers and relational algebra, both critically important in practice).

The above rendering could be better with regard to “only” but the point is clear enough (assuming functional existentials are intuitive enough); it is logically equivalent to switching the antecedent and consequent of the quantification or the direction of the implication.

In a forthcoming post, we’ll demonstrate the resulting logic in action!

The more “conflated” rendering is explained in more detail in our patent filings (available on LinkedIn).  It is certainly easier on Linguist users and also facilitates more efficient reasoning  (including textual entailment, logical implication, and defeasible reasoning).

The representation has further details which relate elements of the logic to the lexicon and the text as well as grammatical and semantic details, such as person, number, gender, tense, aspect, mood, sentence form (e.g., interrogative, declarative, or imperative), etc.