Just a quick note about a natural language interpretation that came up for the following sentence:

The NLP system comes up with many hundreds of plausible parses for this sentence (mostly because it’s considering lexical and syntactic possibilities that are not semantically plausible).  Among these is “meaning” as a nominalization.

It’s quite common to use the present participle of a verb as a noun.  In this case, Google comes up with this definition for the noun ‘meaning’:

The NLP system has a definition of “meaning” as a mass or count noun as well as definitions for several senses of the verb “mean”, such as these:

These senses of different “arguments” or “valence”, such as a noun or verb phrase, possibly involving a preposition such as to, at, or by.

The relevant definition of the verb ‘mean’ used here that the meaning of the section is the definition of a transaction, as in the following lexical entry from the English Resource Grammar:

This lexical entry “insists” on the verb having a noun phrase as its object, which results in a parse having “(a)” as the object of the verb “mean”, which is not ideal semantics. 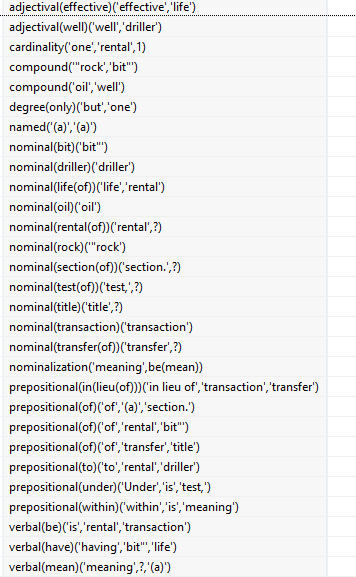 Thus, rather than selecting the verbal clause during disambiguation, the nominal definition of “meaning” should be selected as shown below. 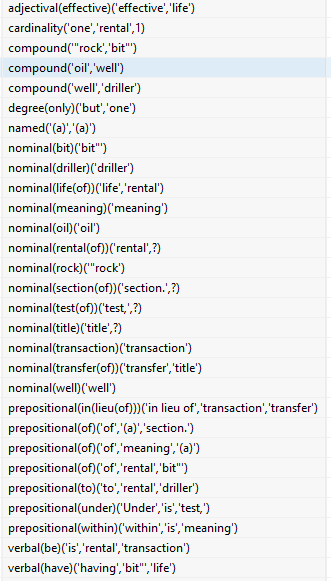 I would not say this user made a mistake but that the lexical entries within the grammar led to the incorrect result which could easily be corrected by resetting and selecting “meaning” as a nominal rather than as verbal (which is, effectively, what selecting a nominalization does).