Our efforts at acquiring deep knowledge from a college biology text have enabled us to answer a number of questions that are beyond what has been previously demonstrated.

A couple of these are at higher levels on the Bloom scale of cognitive skills than Watson can reach (which is significantly higher than search engines).

As some other posts have shown in images, we can translate completely natural sentences into formal logic.  We actually do the reasoning using Vulcan’s SILK, which has great capabilities, including defeasibility.  We can also output to RIF or SBVR, but the temporal aspects and various things such as modality and the need for defeasibility favor SILK or Cyc for the best reasoning and QA performance.

One thing in particular is worth noting:  this approach does better with causality and temporal logic than is typically considered by most controlled natural language systems, whether they are translating to a business rules engine or a logic formalism, such as first order or description logic.  The approach promises better application development and knowledge management capabilities for more of the business process management and complex event processing markets.

The call transcript from TIBCO’s Dec 21 review of Q4 results is great reading.  Starting from a simple Rete Algorithm and the insightful acquisition of Spotfire, TIBCO has transformed itself from a technical middleware vendor to a promising enterprise platform.

TIBCO has a long way to go in making its business optimization offerings less technical, but for those that can tolerate less alignment between IT and the business than may be ideal, TIBCO is leading the way in integrating technical agility with business visibility.

It will be tough for Oracle or IBM or SAP to close the gap with what TIBCO has.  Don’t be surprised if rule-based event-driven business processing drives the acquisition of TIBCO by one of these over the next two years.  The growth rate certainly justifies it!  And it won’t stop.

The slides for my Business Rules Forum presentation on event semantics and focusing on events in order to simplify process definition and to facilitate more robust governance and compliance are at Event-centric BPM.

After the talk I spoke with Jan Verbeek and Gartjan Grijzen of Be Informed and reviewed their software, which is excellent.  They have been quite successful with various government agencies in applying  the event-centric methodology to produce goal-driven processing.  Their approach is elegant and effective.  It clearly demonstrates the merits of an event-centric approach and the power that emerges from understanding event-dependencies.  Also, it is very semantic, ontological, and logic-programming oriented in its approach (e.g., they use OWL and a backward-chaining inference engine).

They do not have the top-down knowledge management approach that I advocate nor do they provide the logical verification of governing policies and compliance (i.e., using theorem provers) that I mention in the talk (see Guido Governatori‘s 2010 publications and Travis Breaux‘s research at CMU, for example) but theirs is the best commercially deployed work in separating business process description from procedural implementation that comes to mind. (Note that Ed Barkmeyer of NIST reports some use of SBVR descriptions of manufacturing processes with theorem provers.  Some in automotive and aerospace industries have been interested in this approach for quality purposes, too.)

BeInformed is now expanding into the United States with the assistance of Mills Davis and others.  Their software is definitely worth consideration and, in my opinion, is more elegant and effective than the generic BPMN approach.

The basic formal ontology (BFO) offers a simple, elegant process model.   It adds alethic and teleological semantics to the more procedural models, among which I would include NIST’s process specification language (PSL) along with BPMN.

Although alethic typically refers to necessary vs. possible, it clearly subsumes the probable or expected (albeit excluding deontics0).  For example, consider the notion of ‘disposition’ (shown below as rendered in Protege):

Disposition is nice because it reflects things that have an unexpected high probability of occurring1 but that may not be a necessary part of a process.   It seems, however, that disposition is lacking from most business process models.  It is prevalent in the soft and hard sciences, though.  And it is important in medicine.

Disposition is distinct from what should occur or be attempted next in a process.  Just because something is disposed to happen does not mean that it should or will.  Although disposition is clearly related to business events and processes, it seems surprisingly lacking from business models (and CEP/BPM tooling).2

A teleological aspect of BFO is the notion of purpose or intended ‘function’, as shown below:

Function is about what something is expected to do or what it is for.  For example, what is the function of an actuary?  Representing such functionality of individuals or departments within enterprises may be atypical today, but is clearly relevant to skills-based routing, human resource optimization and business modeling in general.

0 SBVR does a nice job with alethic and deontic augmentation of first order logic (i.e., positive and negative necessity, possibility, permission, and preference).

1 Thanks to BG for “politicians are disposed to corruption” which indicates a population that is more likely than a larger population to be involved in certain situations.

2 Cyc’s notion of ‘disposition’ or ‘tendency’ is focused on properties rather than probabilities, as in the following citation from OpenCyc.  Such a notion is similarly lacking from most business models, probably because its utility requires more significant reasoning and business intelligence than is common within enterprises.

I couldn’t agree more with these points from Giles Nelson’s article in CIO on BPM and event processing (as highlighted by TIBCO’s Paul Vincent):

I am glad to see other leaders pursuing the vision of knowledge-based enterprise.  As I discussed, IBM is getting there (but SAP seems out of the picture).  Will Oracle take the lead?

The folks from Knowledge Partners have a post that I found thanks to Sandy Kemsley, whose blog often provides good pointers.  This article talks about the decision perspective on business rules.  It makes some good points, on which I would like to elaborate albeit at a more semantic or knowledge-level.

Every language has three kinds of statements: questions, statements, and commands.   There are also some peripheral types, such as exclamations (Yikes!), but in business processes and decisions only declarative and imperative sentences matter.

From a process- or decision-oriented perspective, decisions are always phrased as imperative sentences.  Otherwise, the statements reflected in any business process, whether you are using BPMN or a BRMS, are declarative sentences.

Decisions are imperative sentences because they state an action to be taken.  For example, decline a loan or offer a discount.  It’s really pretty simple.  A decision is an action.  Rules that don’t take actions are statements of truth.  Such declarative statements of truth are perfect for formal logic, logic programming, and semantic technologies.  It’s the action that requires the production rule technology that dominates the market for and applications of rules.

The authors of the aforementioned article use the following diagram to explain the benefits of the decision-oriented approach in simplifying business processes:

The impact is very simple.  If you eliminate how you reach decisions from the flow that you diagram in BPMN things get simpler.  It’s really as simple as realizing that you have removed all the “if” parts (i.e., the antecedents) of the rule logic from the flow chart.

So who in their right mind would use a business process tool to express any business logic? END_OF_DOCUMENT_TOKEN_TO_BE_REPLACED 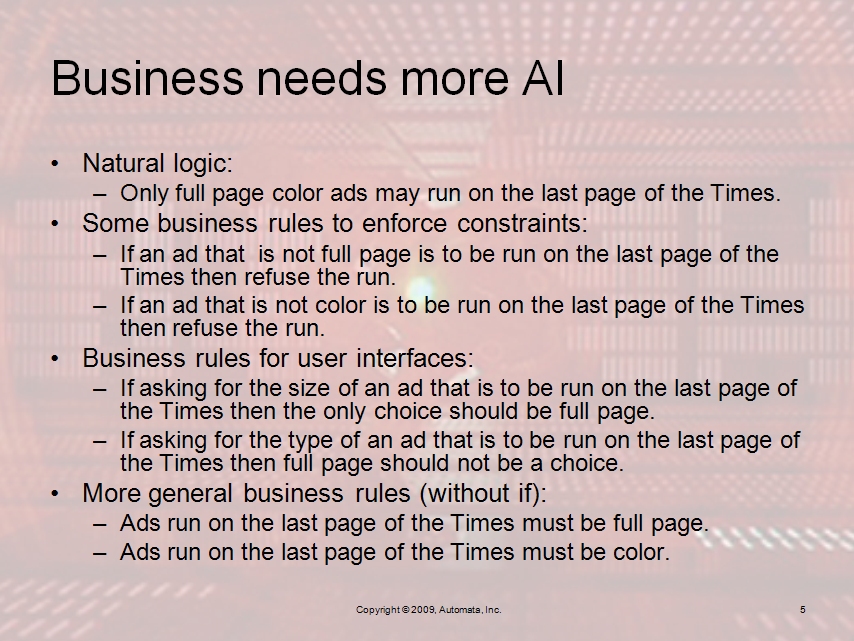 END_OF_DOCUMENT_TOKEN_TO_BE_REPLACED

On the heels of IBM’s acquisition of Lombardi comes Progress Software’s acquisition of Savvion.  The salient similarities are that IBM is adding BPM applications to its middleware stack as is Progress, at least with regard to its enterprise service bus offerings.  More interesting is the relationship between Progress’ complex event processing software and Savvion’s BPM.  Also of note is the vendor-provided integration of JBOSS Rules within Savvion versus the unrealized potential of IBM’s Ilog with respect to Lombardi.

We’ve written several times about the artificial distinction between CEP and BPM, their inevitable convergence, and the immature integration of business rules with business process management and event processing that inhibits knowledge-driven governance and decisioning. END_OF_DOCUMENT_TOKEN_TO_BE_REPLACED

In preparing for my workshop at the Business Rules Forum in Las Vegas on November 5th, I have focused on the following needs in reasoning about processes, about events, and about or over time:

Enterprise decision management (EDM) addresses the first.  Complex event processing (CEP) is concerned with the second.  In theory, EDM could address the third but it does not in practice.  This third item includes  the issue of governing and defining workflow or event-driven business processes rather than point decisions within such business processes.

Business applications of rules have not advanced to include the fourth item.  That is to say, business has yet to significantly leverage reasoning or problem solving techniques that are common in artificial intelligence.  For example, artificially intelligent question and answer systems, which are being developed for  the semantic web,  can do more than retrieve data – they perform inference.  Commercial database and business intelligence queries are typically much less intelligent, which presents a number of opportunities that I don’t want to go into here but would happy to discuss with interested parties.  The point here is that business does not use reasoning much at all, let alone to search across the potential ramifications of alternative decisions or courses of action before making or taking one.  Think of playing chess or a soccer-playing robot planning how to advance the ball on goal.  Why shouldn’t business strategies or tactical business decisions benefit from a little simulated look-ahead along with a lot of inference and evaluation?

The notion of enterprise decision management (EDM) is focused on point decision making within a business process.  For enterprises that are concerned with governing business processes, a model of the process itself must be available to the business rules that govern its operation.  I’ve written elsewhere about the need for an ontology of events and processes in order to effectively integrate business process management (BPM) with business rules.  Here, and in the workshop, I intend to get a little more specific about the requirements, what is lacking in current standards and offerings, and what we’re trying to do about it. END_OF_DOCUMENT_TOKEN_TO_BE_REPLACED 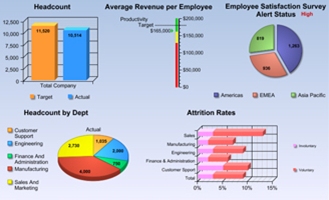 In this article I hope you learn the future of predictive analytics in decision management and how tighter integration between rules and learning are being developed that will  adaptively improve diagnostic capabilities, especially in maximizing profitability and detecting adversarial conduct, such as fraud, money laundering and terrorism.

With good visualization, management can gain insights into how to improve business processes, but if the view does include a focus on outcomes, improvement in operational decision making will be relatively slow in coming.

Whether or not you use business intelligence software to produce your reports or present dashboards, however, you can improve your operational decision management by applying statistics and other predictive analytic techniques to discover hidden correlations between what you know before a decision and what you learn afterwards to improve your decision making over time.  END_OF_DOCUMENT_TOKEN_TO_BE_REPLACED